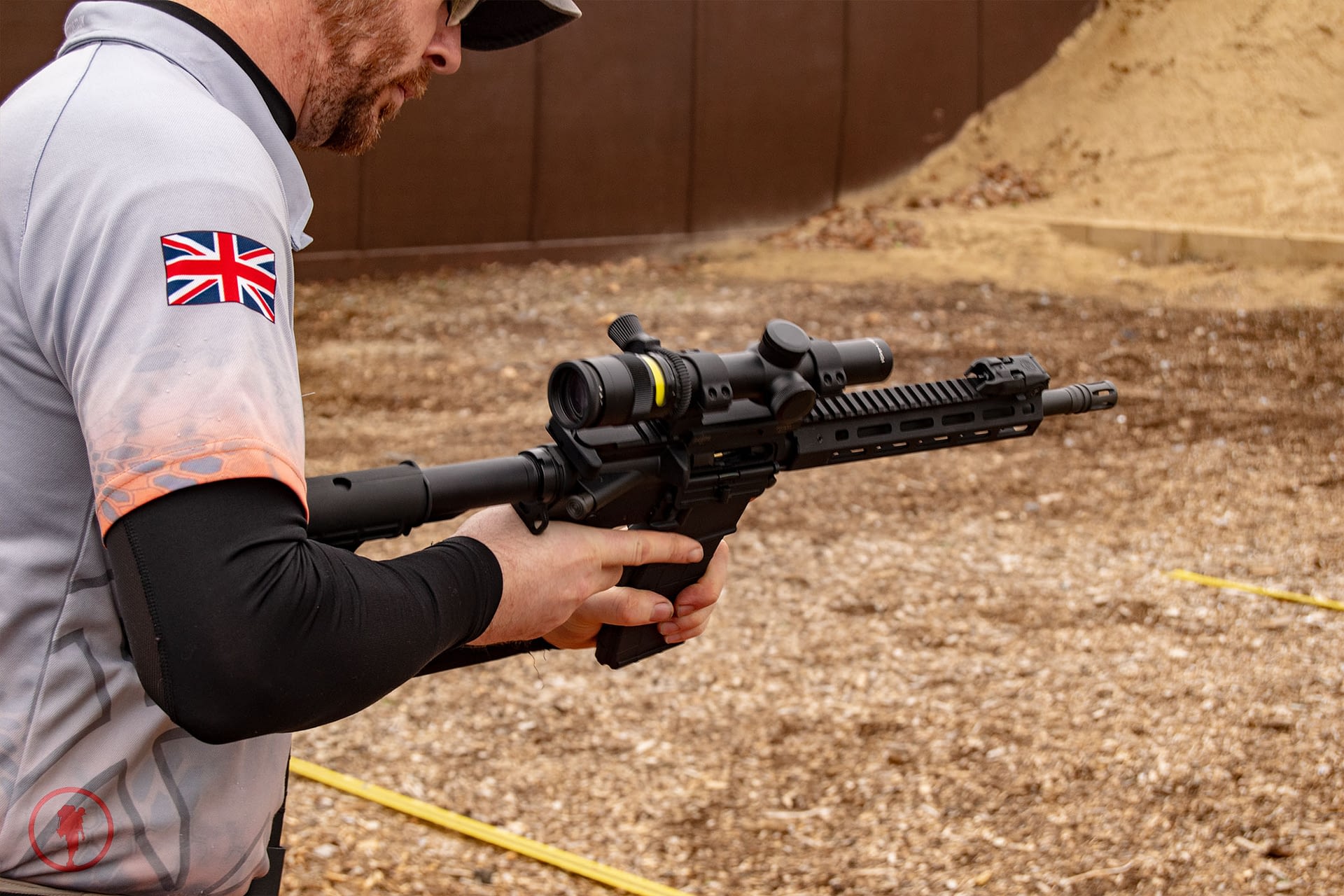 The Tippmann Arms M4-22LR Elite S is the short barreled variant of the Elite series of .22 rifles offered by Tippmann with a shorter profile but the same features that are available on all Elite series rifles. One of the most distinctive features of the Tippmann M4-22LR is how it retains all the same ergonomics and features of an AR15, including a working forward assist button.

There is a lot of competition out there for the Tippmann Arms M4-22 considering the Kriss Defiance, Smith & Wesson M&P 15-22 and much more expensive alternatives such as the Lantac .22 AR15 rifle. It is worth noting that the Tippmann is a full metal receiver which closely resembles the AR15 and all of its features.

The Tippmann Arms M4-22 Elite Tactical Rifle is a semi-automatic .22 calibre rimfire rifle with an aluminium receiver and all the same features of an AR15. The buffer tube and barrel nut threading allows for milspec components and furniture to be used in part of what is already provided. The receiver has a functioning fire selector, bolt catch, magazine release, forward assist button and charging handle which is what you would expect from a replication of an AR receiver assembly.

The Tippmann comes with an A2 style branded stock with over 3 positions along the buffer tube. The stock is branded with the Tippmann logo and is skeletonised to reduce weight. There is a sling loop at the bottom and a pass through, allowing for a sling to be attached to the stock. If those sling positions are not adequate, the buffer tube sling plate also has an attachment point on both sides. 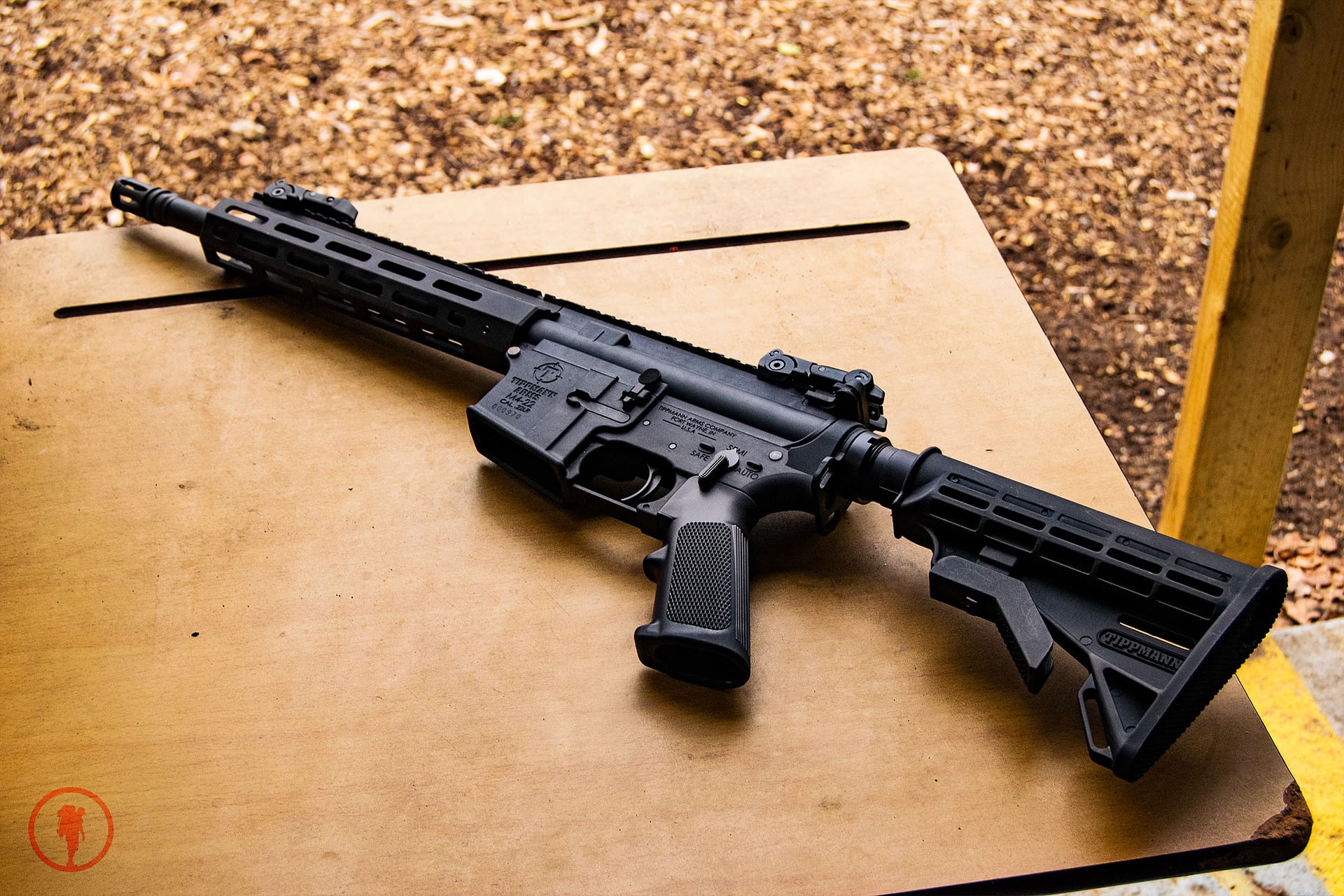 As mentioned before, the buffer tube is compatible with milspec stocks which leaves room for customisation. The Tippmann also comes with an A2 pistol grip (other models come with a more ergonomic pistol grip with a beaver tail for added comfort), which can also be replaced with AR compatible pistol grips. The charging handle is a proprietary part which interfaces with the .22 bolt carrier and cannot be replaced with an aftermarket AR15 charging handle. 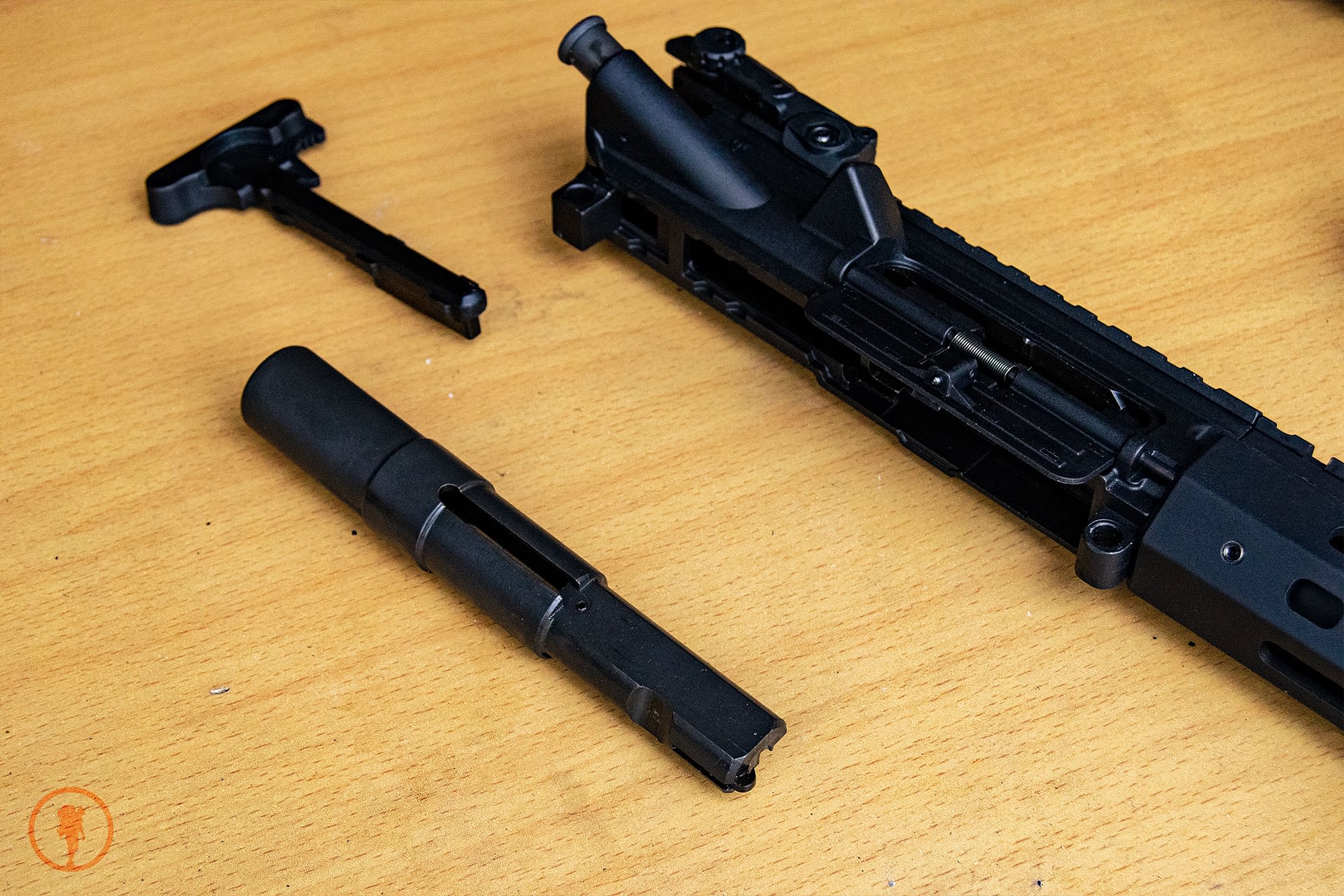 The trigger unit in the Tippmann Arms M4-22 is compatible with other AR parts and can take certain aftermarket parts (safety lever is proprietary) as long as they are suitable for milspec receivers. The top of the upper receiver has a Picatinny rail otherwise known as a MIL-STD-1913 rail which is commonly used across the market for optics attachments. The trigger is what you would expect from a stock AR platform and weighs in at between 4 and 5 lbs of trigger pull before break. The magazine release is located on the right hand side of the receiver, alongside a working dust cover and shell deflector. 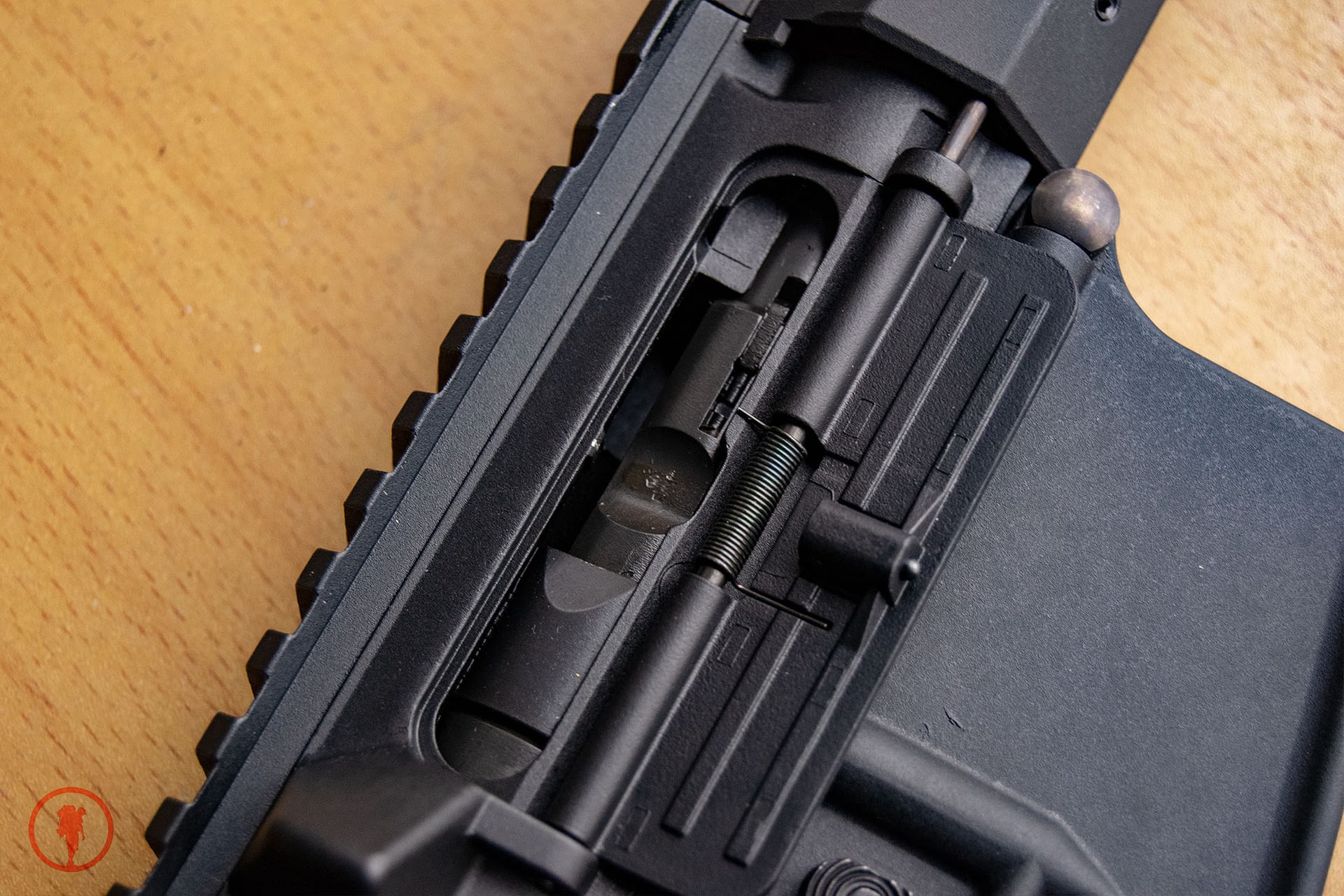 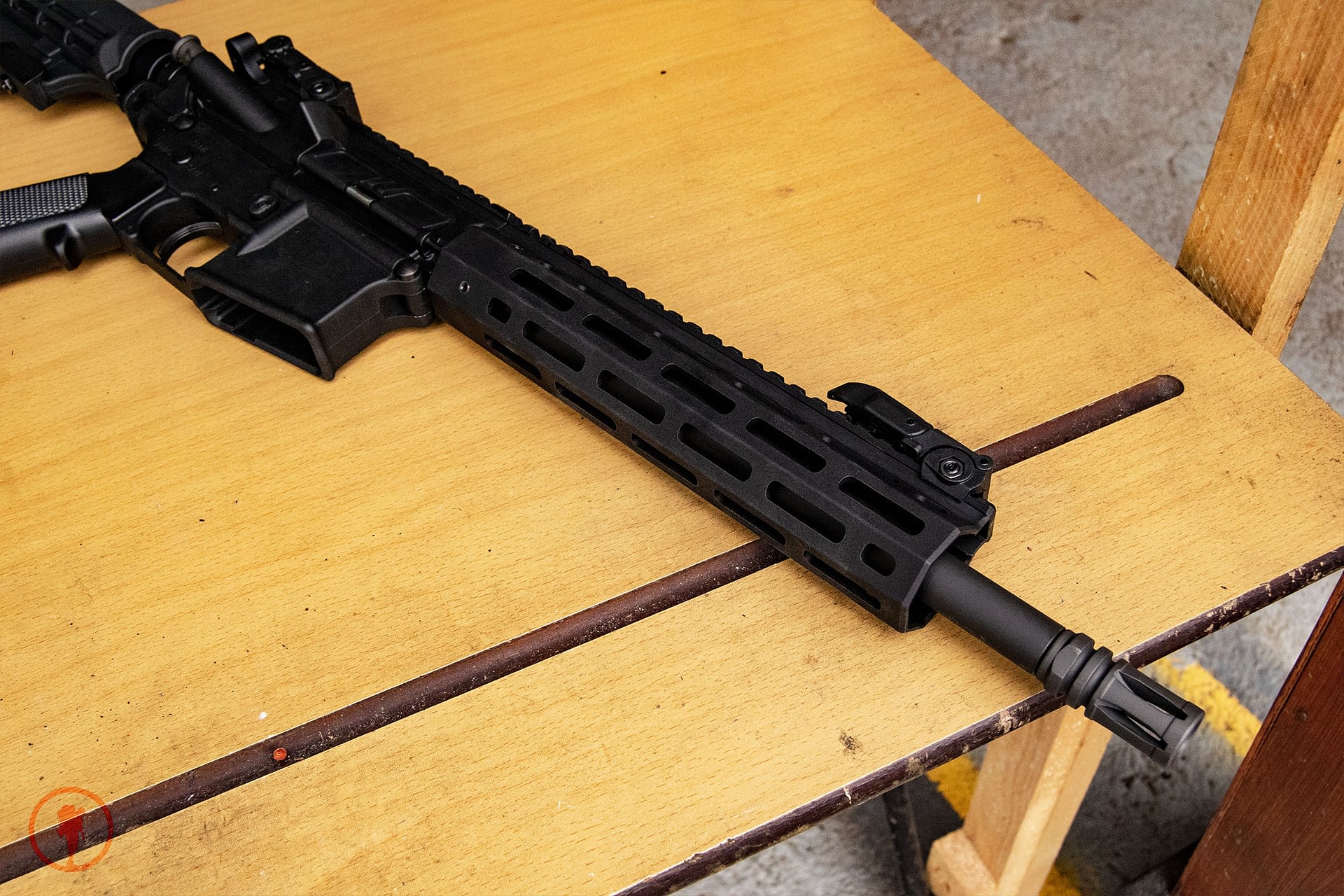 The barrel is a 12 inch 4150 solid steel barrel at a twist rate of 1:16 with a 1/2″x28 thread at the end of it. The muzzle break is a standard bird cage device which can be replaced with aftermarket parts. The Tippmann Arms M4-22 uses proprietary magazines which come in 10, 20 and 25 round capacities and are housed within a AR STANAG style ribbed polymer magazine with an external and internal compartment. The magazines are loaded by pulling the internal compartment out of the shell of the magazine and loading the magazine whilst pulling the spring retainer down.

The Tippmann M4-22LR Elite comes with a more interesting set of furniture than its earlier release of the M4-22LR. The M-LOK rail is a big improvement upon the old rail system that was used with the classic variation as it’s more modern and incorporates the already established M-LOK system. The aluminium receiver feels very much like an AR15 rifle with a similar finish and replicated controls across the entire receiver. 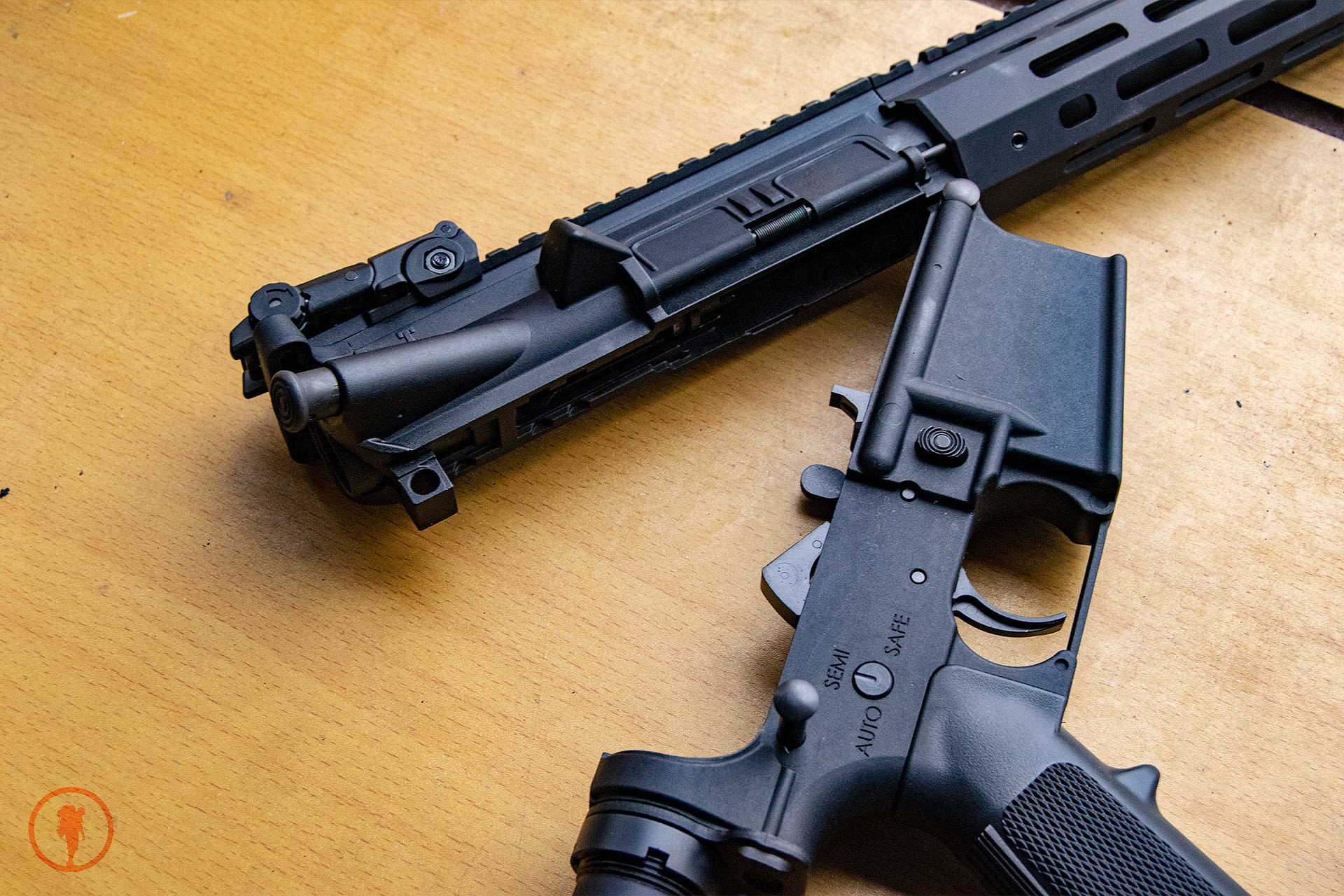 The paintwork of the rifle is a fine coating which is smooth and fairly scratch resistant. The shade of black on the rifle is also consistent across the rifle which gives it a professional look. The A2 pistol grip and the A2 style stock is fairly basic compared to the handguard, however they’re fit for purpose and can be swapped out if need be. The Tippmann branding on the stock can feel a little tacky and may lead to it being replaced by most users with their favourite alternatives. 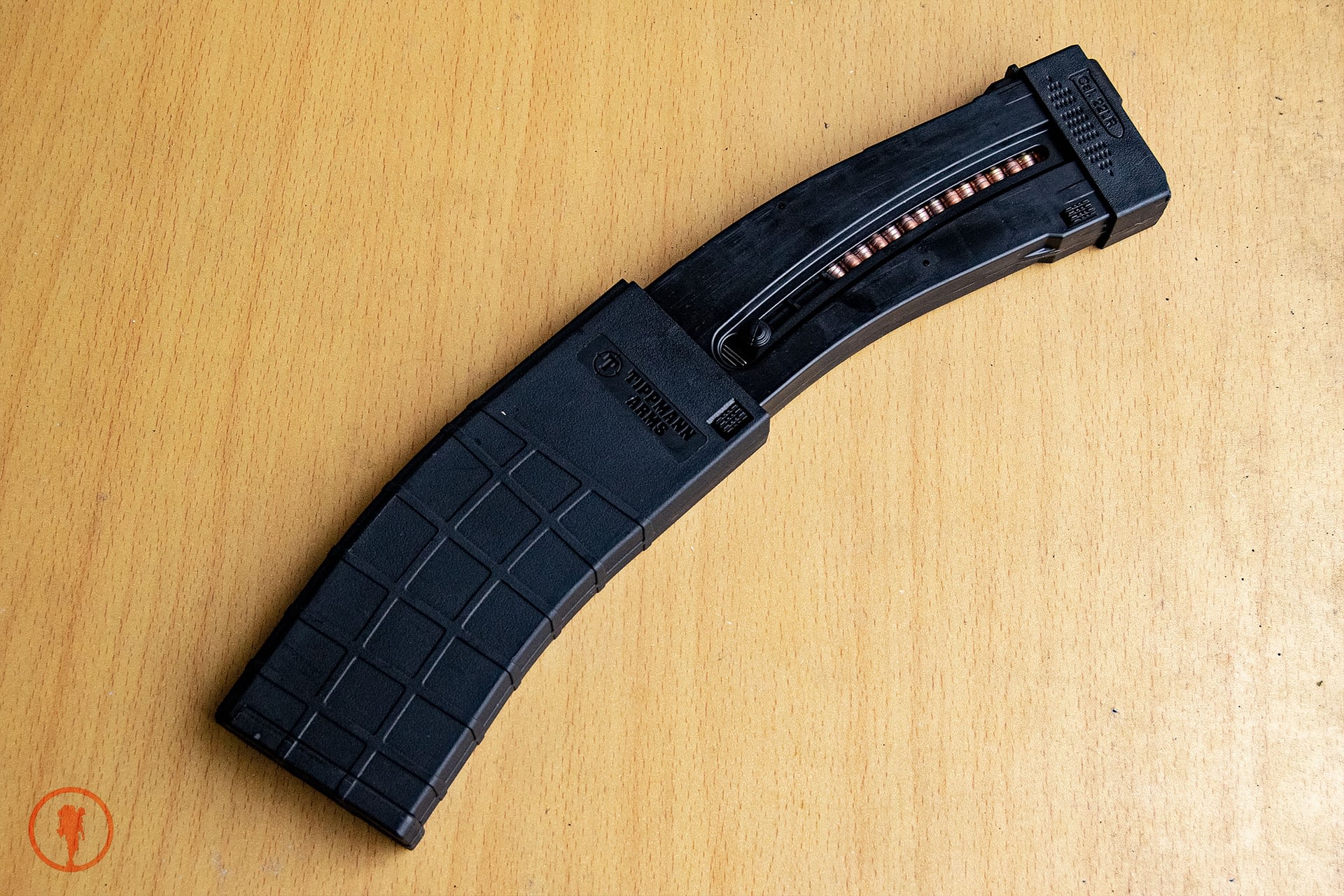 The magazine shell has an interesting checker design which gives it some aesthetics over just being a dull stanag style shell. Although it is made of plastic, the magazine assembly overall is not light and flimsy as it maintains a good mass whether it be unloaded or loaded which helps with handling in general. Overall the rifle has a nice slick look which is a nice touch to what is otherwise a mostly customisable rifle.

The Tippmann M4-22LR is a rimfire rifle with the purpose of being used for general shooting and training as a substitute to a .223 AR rifle of similar furniture and design. It has not been advertised as a match or competition rifle. It is worth noting that although it is not designed to shoot in a competition, it could be used in a match environment if a user so chooses to. 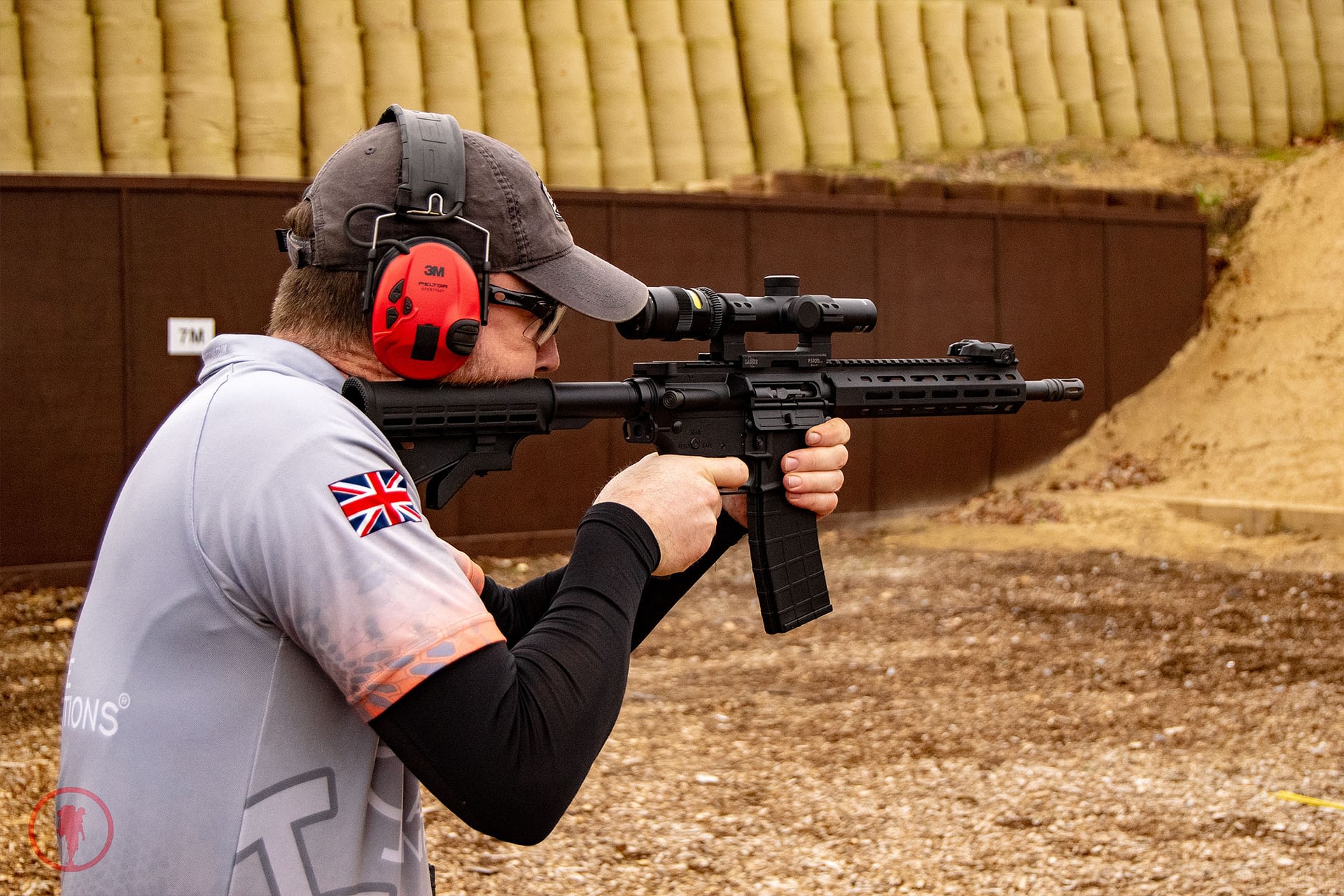 When shooting the rifle, the recoil impulse is short and quite well absorbed by the aluminium receiver to the point in which it can barely be felt. The trigger pull feels just right when compared to that of the equivalent mini rifles with a nice crisp break when firing and a simple yet clear reset within a mm of the break. The other controls such as the fire selector and the mag release hold nothing special as they function as expected with tactile feedback and notably clicks into position for the fire selector. 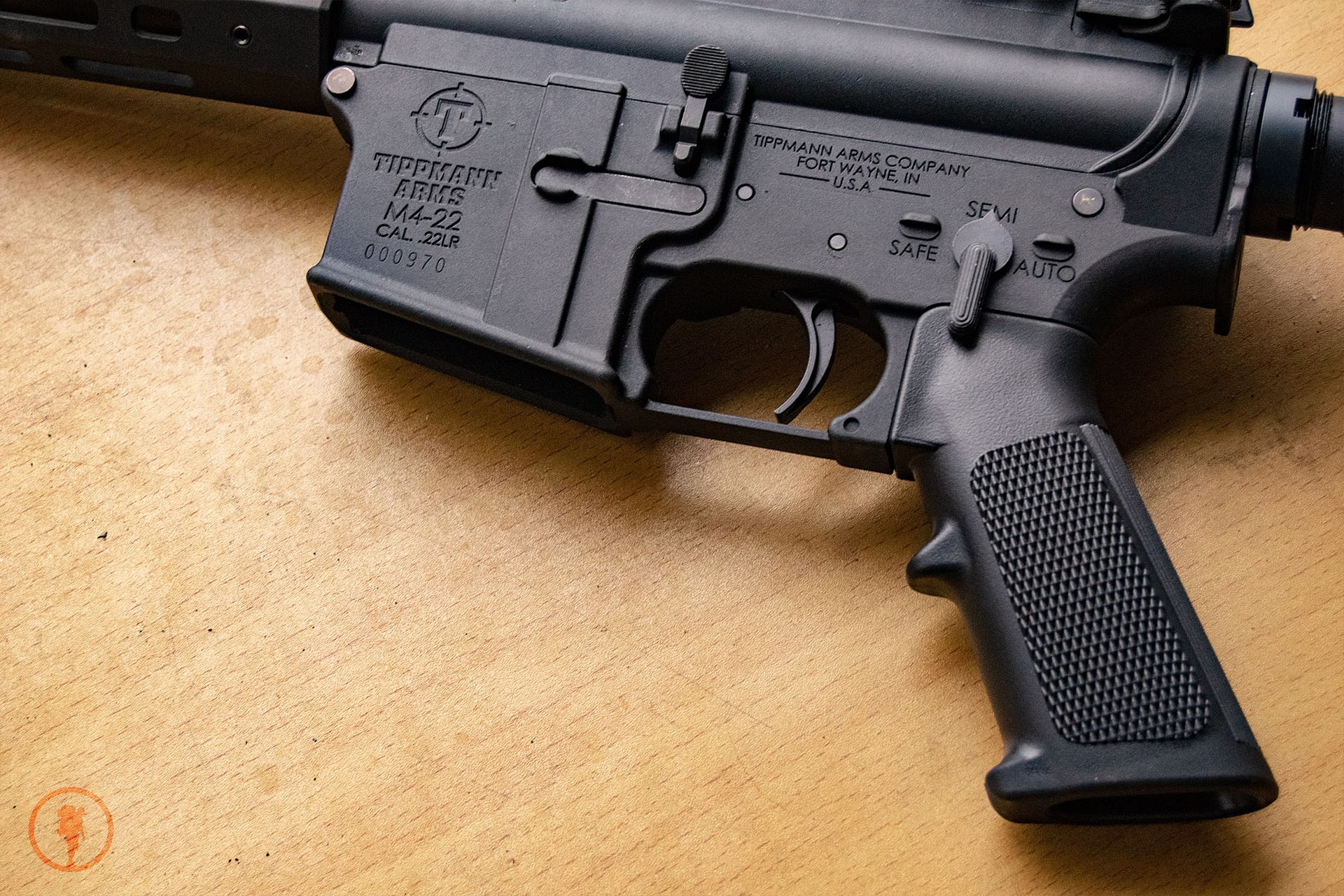 The front and rear sights are adjustable for windage and elevation which is expected. The surprising element is that the sights are substantially sturdy and capable of maintaining zero even though they are made of plastic. The monolithic rail system at the top of the receiver and across the handguard is very useful for mounting optics of many sizes including laser and illumination devices. The use of M-LOK accessories and rail attachments can also assist in mounting foregrips and other devices in multiple positions.

The Tippmann magazine is a two part shell with an internal magazine, retainer, follower and metal feeder lips. The outer shell is a nice addition which covers the cartridges and magazine spring from general dust and the effects of the weather. With the first few magazines of ammunition, there were a few subsequent jams where the cartridge failed to go into battery (CCI Standard), however that subsided after the first 10 magazines as the rifle consistently fed and ejected each cartridge. 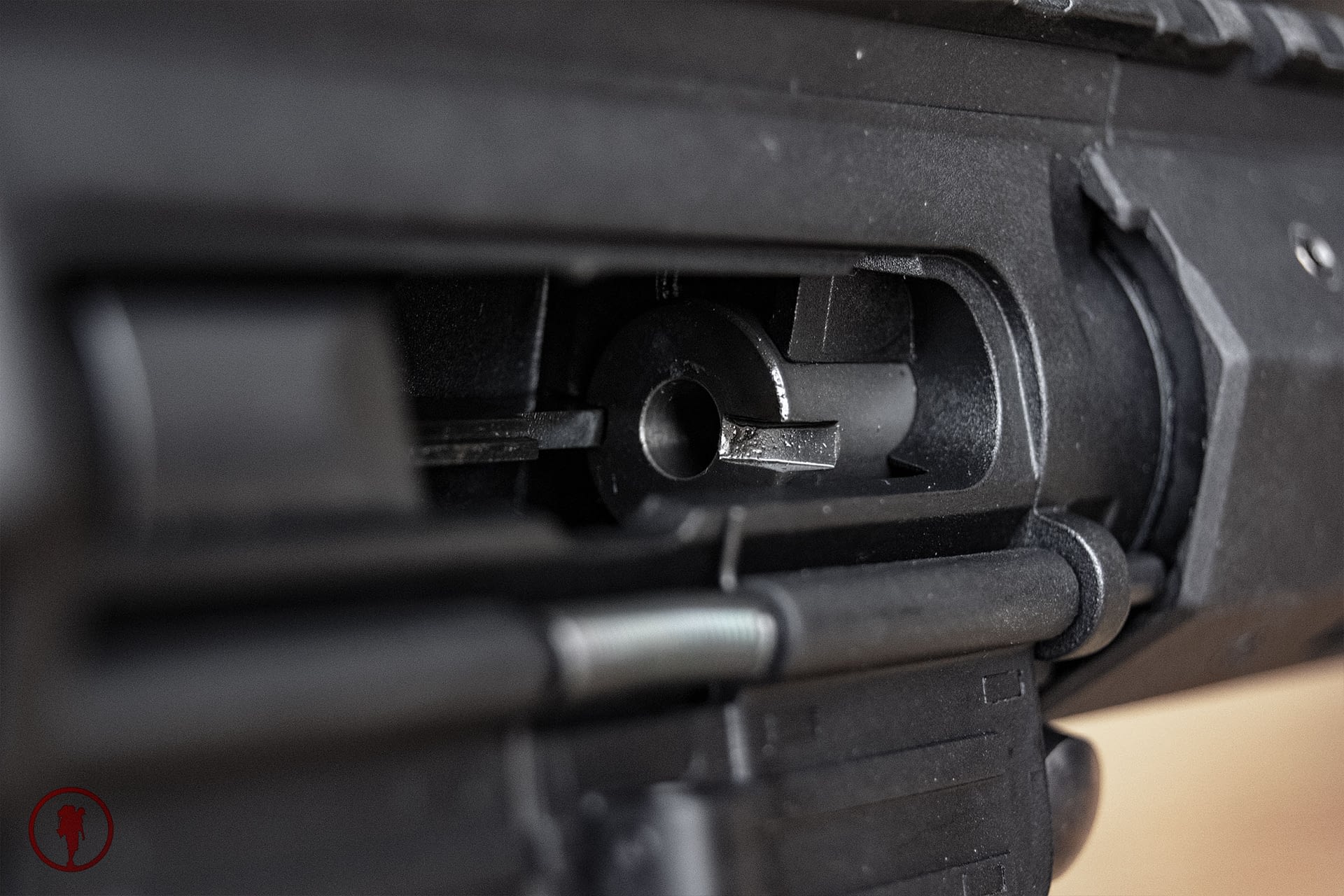 There were little to no cases in which the forward assist was helpful as the bolt carrier group isn’t far forward enough to allow the forward assist to engage with the serrations on the BCG. It’s worth noting that it is better practice to strip the mag and charge the BCG to rectify the failure than to try and assist the bolt forwards. A variation of non subsonic .22 ammo was used on the Tippman Arms M4-22LR with little difference in operation or close range groupings (not enough data was collected to verify what ammunition was most accurate at longer ranges). 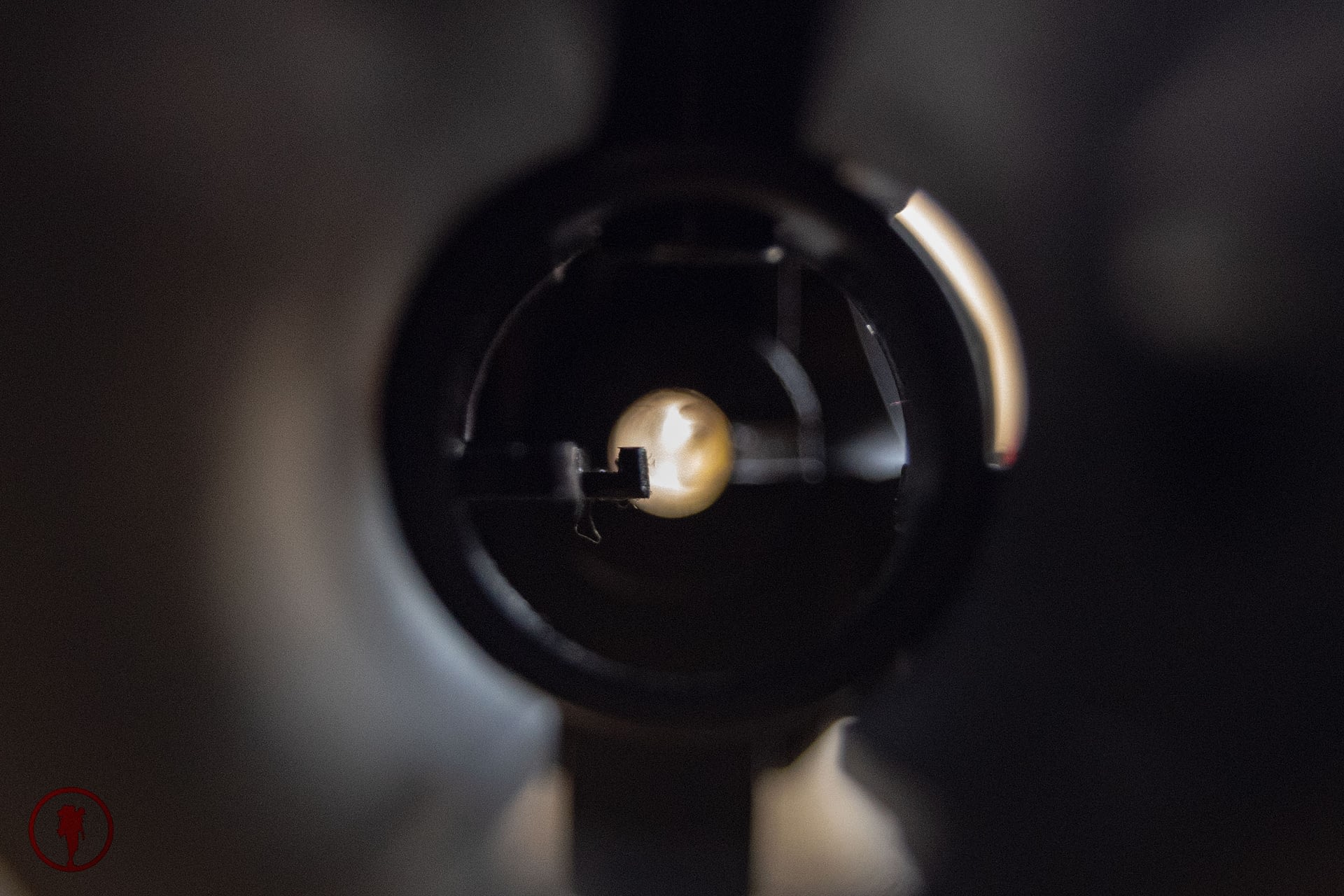 The average groupings on a test bench was 15 mm @ 50 metres using a ranged optic for assistance. These results were verified with other users using the same length barrel and similar ammunition. Different models of Tippmann Arms .22 rifles seem to work best with different brands of ammunition and there has been no clear preference or recommendation that can be brought forward.

The Tippmann Arms M4-22LR Elite is a well built rifle with no wobble across all the components and furniture. The stock does have some wobble with connection to the buffer tube however this can easily be modified to have less wobble. The paintwork on the receiver and the handguard is quite robust and has not shown any discolouration and does not show any unexpected wear without the carelessness of the user.

The steel barrel and breach do require some maintenance and cleaning to maintain the reliability of chambering and extracting of .22 cartridges. This is a common requirement for .22 calibre carbines as the ammunition easily leads to residue and clogging of the mechanisms. There is no set period as to when you should clean the breach or the barrel, generally it’s worth doing so at a regular basis in conjunction with how much you shoot and when you start to see issues with feeding or extracting.

The Tippmann Arms M4-22LR Elite series range in the £900~ region depending on the retailer (much more expensive than the US market) which is close to double the most common competitor (Smith & Wesson M&P 15-22). It is also worth noting that many other brands such as Sig Sauer’s 522 and the Ruger 10/22 Autoloading rifles are much cheaper and comparably more unique.

If the need to be an AR 15 style rifle is adhered to, a similar comparison would be the Kriss Defiance MK-22 with similar pricing and similar features and compatibility with other brands of magazine. In some cases, the Kriss Defiance could be preferred based on the price value of the Tippmann Arms M4-22LR.

The Tippmann Arms M4-22LR Elite series is an interesting addition to the list of .22 based carbines available on the market. There is no reason a Tippmann Arms M4-22LR should not be considered for the purpose it is focused for, however there are some compromises such as the proprietary magazines and the inability to change the charging handle.

One of the main disadvantages of the Tippmann is the pricing that is available compared to other brands in the market. The Tippmann does not seem to prove it’s cost and would be more enticing if the pricing was lowered to the same price band as the Smith & Wesson M&P 10-22 at £500~ as it would not only be affordable but would better represent its US market prices and show the same value as the US market would give it.