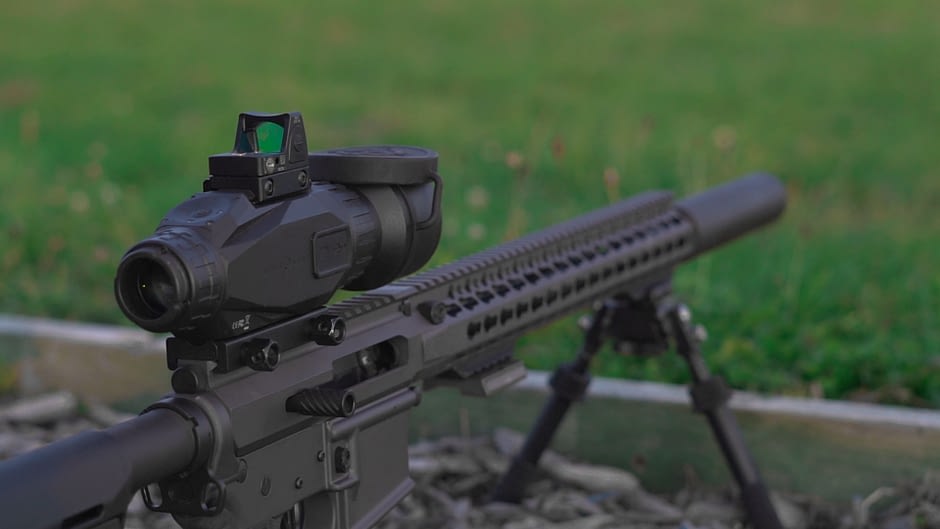 The use of combination optics with the ability to shoot at both day and night environments, is on the rise. Many pest control and hunting professionals have been been drawn towards thermal optics which are relatively expensive and unique in their ability to help with both shooting and spotting animals camouflaged in the terrain. An alternative to thermal optics are day-night optics at fairer prices but with a reduced effectiveness at detection. These optics may also be one of the only alternatives when shooting recreationally at targets with no heat signatures.

The Sightmark Wraith HD is a day night digital rifle scope with the ability to present a target in full colour imagery. During the day, the Wraith can work just like a normal optic with added digital features. At night, the Wraith is able to provide night vision capabilities in two alternative view modes which allow for illumination with IR light. A product with a definite market for anyone interested in mid-range plinking and hunting regardless of the time of day.

The Sightmark Wraith HD is a digital high definition riflescope with a 4-32x50mm housing. Using an advanced 1080p HD sensor and a 720p FLCOS screen, the Wraith is capable of providing color clarity in the daytime and switch to black/white or emerald monotone clarity in night mode. With a removable 850nm IR illuminator, the Wraith HD is said to be able to sight a target at up to 200 yards. Powered with 4 AA batteries in the side of the housing, the battery life is rated at 4.5 hours for continuous use. The rifle scope also includes a MicroSD slot for recording AVI video and jpeg photos.

The Wraith HD body is rated shockproof from drops of up to 3 feet and is IP55 dust and water resistant (not waterproof). The entire unit, including the batteries, weighs in at just over 36 ounces (just over 1 kg). Rated to handle multiple calibres, the device is rated to work on any platform up to .308. The housing fits onto any picatinny rail system with the use of the bottom mount and two tightening screws.

A MicroUSB slot is also available for accessing file storage and powering the Wraith with an external power bank. The Wraith HD can support any micro SD card with up to 64 GB of storage. With a full 64 GB card, the Wraith is able to record up to 7 hours of video footage.

The 50mm optical lens on the front of the device has a relative aperture of 2.5/f and a minimum focal distance of 3.6 metres. At 100 metres, the field of view is 7 metres across. Although the Wraith HD has a fixed 4x optical zoom, the magnification can be increased a further 8x digitally. At maximum digital zoom, the Wraith HD has a full zoom capability of 32x.

There are 10 different reticule options to choose from with 9 different varieties of colours. The Wraith also provides 5 different profiles for preset zeroing and software options. A unique feature available on the Wraith is the zero function, allowing for easy set up on any rifle. The eye cup features a diopter for eye relief and an inset for the use of an eye cup extension. The front lens has a focus dial near the middle of the housing. The top picatinny rail allows for the addition of a secondary optic and/or the provided mount and the IR illuminator.

The main housing of the Sightmark Wraith HD is very sturdy. Built with consideration for rough weather conditions, the device is easy to grip and designed to not snag on clothing or other equipment. The entire unit is painted black with no markings, giving the entire optic a stealthy aesthetic. A rubber front lens protector covers the large lens, but can be removed during operation.

Although the main housing can look a little cheap, the majority of the construction is made of aluminium and as mentioned previously, is shockproof and IP rated. The controls are found at the top, behind the picatinny accessory rail. These controls are basic with a power button and 4 directional buttons for navigation of the menus. The Sightmark logos are all engraved into the housing and maintain the stealthy look of the entire unit.

The main purpose of the Sightmark Wraith HD is to provide a day and night optic for mid-long range shooting. The use of the picatinny mount at the bottom of the device allows for use on any modern rifle system. The tightening screws can be tightened by hand or even further with the right tools to ensure they maintain zero.

The battery cap for the 4 AA batteries can be unscrewed to give access to the compartment and closes back into the device nicely. A long press of the power button, turns on the 720p display and loads a splash screen followed by the visual display of the reticule. From here, the left directional button switches between the day and night modes. The up and down directional buttons control the digital zoom of the reticule, and the right directional button starts and stops video recording. A single press of the power button gives access to the menus and a long press prompts the device to switch off.

One of the most interesting features of the Sightmark Wraith HD is the zeroing feature which allows for the reticule to be zeroed on the rifle within at least one shot on a target. This feature is relatively intuitive and only requires an initial shot to be fired at a marked target. The reticule can then be moved to the point of impact from the original intended point of aim. This is done via the reticule settings menu and applied using the directional buttons. Once this is done, the device is essentially zeroed for that rifle. This can be applied to up to 6 different swappable weapon profiles.

Other than being able to swap between profiles for different zeroes, these different profiles can also retain the different reticule options and their colours. This is a useful feature as it also allows the user to customise their reticule for each different rifle that they use. It’s worth noting that there is no guarantee that the Wraith HD can hold zero when removed and reattached to a rifle. This may not be a huge concern if the rifle is to be zeroed every time the Wraith is attached as the process is somewhat seamless.

The recording capabilities of the Sightmark Wraith HD are not something to shout about, however this feature is very useful for documenting your shooting. A recording of the Sightmark does look quite busy with a number of HUD elements presented in the video. The Sightmark logo is clearly presented at the top right corner followed by a series of elements at the bottom including the date and time. These elements also include the magnification of the Wraith HD, the weapon profile selected and the battery indicator at the bottom right corner.

One of the main issues with a digital optic such as the Sightmark Wraith HD is the refresh rate of the screen. It is a noticeable compromise that is only evident during quick directional adjustments and any abrupt changes due to recoil. This is a compromise that occurs with any digital optic and must be taken into consideration when having a practical use for one. The Wraith HD records a refresh rate of 30 frames per second, however the screen refresh rate may be slightly higher which is more beneficial. The higher the refresh rate, the more natural the movement will feel through the optic.

The initial look and weight of the Sightmark Wraith HD gives it the presumption of great durability. The feel and rugged application of the buttons also make the housing look capable of withstanding more than what the technical specifications illustrate. This was not tested to an extreme extent, however, there were enough occasions were the Wraith would have at least lost zero on the rifle. Other than a few paint chips on the mounting screws, the overall unit is relatively spotless after much use during review. Bare in mind that this particular model was also a floor model for shows and other outings over the past year or two.

With addition of a rubber front lens protector, the 50 mm lens front lens is protected from scratches during transportation and storage. The rear segment of the housing would normally be protected by an eye cup which is not present with this model. The eye cup is normally provided as part of the purchase of a new unit and was not used in this case due to the more dynamic application of this review.

Initially priced at $700~ which is a relative price of around £550~in the UK market. For a day and night optic, the Sightmark is very economically priced, considering the ability to use the optics at night with IR assistance, and being capable of recording footage through the optic. Unfortunately, the Sightmark Wraith HD has it’s limitations and these become more evident when you try to push the limits of the technology available in the unit. That being said, the current market illustrates that the Wraith HD is fairly priced and would be a great budget optic for hunting and recreational shooting at any time of day or night.

Considering the technologies being used and the value to cost being presented, the Sightmark Wraith HD is a very budget friendly and fair valued optic. Providing both day and night vision capabilities without having to change the configuration of the rifle speaks loudly when being compared to the price of other less accessible product solutions. The Wraith HD is not the best in its class by far, but it doesn’t have to be. It provides to anyone who wants an entry level versatile optic for their rifle, for hunting and any similar activities of the like. The optic overall is capable of being a daily driver for any career professional but does have its limitations when it comes to the technology being used. A thermal optic could easily supersede the Wraith HD, but that in effect is like comparing a motorcycle to a sports car. Each may meet the needs of many in better ways but do so in different formats that cannot be compared without being vague and simple.