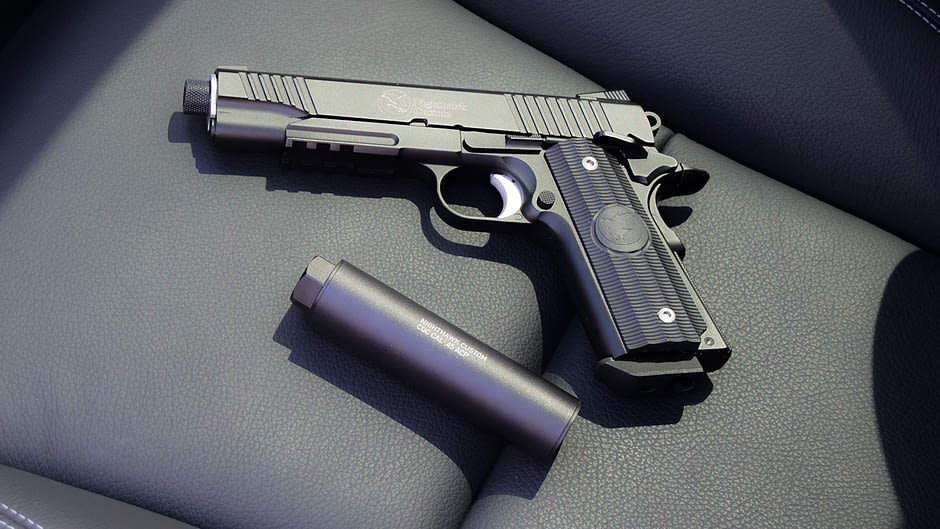 There have been many variants of the popular pistol known as the M1911. From World War era to government issue, all the way to tactical variations that are used to this day. The 1911 MEU is the most relatable to our new review of the RWA Covert Ops C02 pistol due to the dual recoil spring assembly, Picatinny rail that was implemented in late 2012, and threaded outer barrel.

The Nighthawk Covert Ops pistol is the latest revision from the Nighthawk Recon version, however there are a few little changes that have been made since the last model. Unfortunately we have not had the ability to review the Nighthawk Recon and hence will not be able to provide a comparison of the different versions in this review.

The Covert Ops pistol is a Nighthawk Custom licensed C02 pistol with a variation of the MEU frame, threaded outer barrel and a hollow mock silencer. The pistol is presumably based on the KWC C02 1911 and hence can use the same magazines by KWC. The silencer can be filled with foam to help with the noise, however don’t expect any massive noise cancelling considering a large amount of that noise will come from the action of the slide.

The 14mm CCW threaded outer barrel comes with a thread adapter which sits flush with the dimensions of the barrel itself. The thread is perfectly exposed just outside of the front of the slide, allowing for any 14mm CCW attachment to be applied to the front of the barrel. The Nighthawk Custom logo is laser engraved on the slide, along with the Nighhawk Gator Grips and a few little trademarks including the RWA logo on the frame itself.

The Covert Ops as said before, comes with a threaded 14mm CCW outer barrel, Picatinny rail and is powered by C02 capsules. The replica is licensed by Nighthawk Custom and hence has the logo laser engraved on the slide and features the Gator grips on the frame.

The Covert Ops comes with an ambidextrous safety which can be operated by either hand and uses a skeleton hammer. There is a nice little aesthetic feature to the ambidextrous safety showing a little red dot when the safety is off. This is all aesthetics and gives little assistance to assessing the safety unless you don’t rest your thumb on it as intended.

The front and rear sight posts use the common three dot sighting model which allows for quick target acquisition. Both sight posts are slanted and curved at the front to prevent the slide catching on anything, this however also stops the use of sight posts to action the slide.

The trigger is chrome and oddly has a guide rail indentation that goes into the top of the frame. I have yet to find out why this addition has been applied to the design other than to add structure to the feel of the trigger.

Unfortunately, the ambidextrous safety is all you are going to get in regards to weapon manipulation for left handed users out of the box. The magazine release is not ambi-dexterous, nor is the slide release. I’m uncertain that the slide release can be remedied, especially since it locks the slide back and does not allow you to power stroke it to release the slide.

Due to the single stack magazine design of the 1911, it is difficult to apply a 12 gram C02 bulb to it without it bulging out of the magazine. To attend to this issue, the magazine well has been expanded on the sides and allows for a much larger entry of what is expected of a single stack 1911 magazine well.

The magazine itself looks a bit strange and discerningly unrealistic, that is unfortunately one of the biggest disadvantages of using C02 capsules on a single stack replica. You will have to live with the fact that whenever you eject and/or insert a magazine into the Covert Ops, you will find yourself looking at the magazine and being reminded constantly that there is a C02 bulb bulging out of it.

The paintwork on the slide and the frame feels quite well polished but is a bit thin. This does not mean that the paint can easily come off. It has taken a while for the paint to slightly wear in some places, however there is no unexpected wear on any part of the pistol paint work that would concern me.

The serrations on the slide have not shown any paint wear however the outer barrel seems to tell a different story. It only took a few magazines before the outer barrel started to show some wear and tear. This is not necessarily a bad thing unless you like the idea of your pistol always looking perfectly out of the box.

The externals and internals have been reinforced for C02 and so far they have proven the test of time that they are capable of lasting through its life span. This is a very solidly built pistol, although the front and rear sights are now ever slightly wobbly. Almost all the externals and internals are made of metal. The grips are the only part of the pistol that is of polymer materials.

The magazine is built fairly well, however it is heavily reliant on the C02 bulb for operation. The frame of the magazine is made of metal but the feed lip and base plate is polymer constructed. This allows it to be dropped multiple times without damage, however the bulb can cause damage to the inlet due to the vibrations from the impact. As long as you securely tighten and not over tighten the bulb to the magazine, you are not likely to damage the inlet from dropping the magazine.

The base plate is secured with the help of one phillips screw however is also accommodated by a large allen screw which also acts as the part to secure and pierce the C02 capsule. Because the allen screw is large, it is unlikely that it will be easily stripped compared to other methods used to secure C02 bulbs.

The Covert Ops is designed to withstand the power of C02 and hence should be made of sturdy materials that are meant to last thousands of repetitive usages. As of this review, the replica has been used a few hundred times and the only parts to show questionable wear, has been the added wobble that has occurred on the front and rear sight posts.

The internals within the frame have held very well considering the use of C02 as well. The dual recoil spring system is very effective and has shown to give more slide response and return. There is one issue I’ve found with the internals and it’s not due to performance and maintenance, and more to do with sounds. The hammer spring and the main recoil spring make scrunchy noises when compressed.

The Covert Ops 1911 is very snappy and consistently fires at least 70 shots before the C02 capsule starts to show that it has lost pressure and the pistol starts to feel sluggish. Having said that, the pistol can still fire a few more shots before running out completely. Considering the mag capacity of the pistol being at around 14 bbs give or take, that is quite a good amount of magazine reuses before a capsule has to be replaced.

The Covert Ops replica averaged an fps of 340 fps on ASG C02 capsules with 0.2 gram bbs. There is a likelihood that the variance will be larger with different models so please check your individual model for clarity. The shooting test was honestly too good to be true, however these were the results and it shows that this pistol is very accurate at this shooting distance. A variance of 6 cm at 15 metres is very accurate to say the least, I’m unsure if the accuracy would be maintained at 30 metres however I am certain a human target would be more than easy to hit.

The kick on this pistol can be overwhelming at first, in fact when training with the pistol, the time spent between shots was slower not due to the action, but due to the feedback received from the previous shot. This can be interpreted as good or bad depending on whether you want realism or fast performance.

Other than the performance of the pistol when being fired, there are a few negative statements about the usage of the pistol. As described before, the slide cannot be actioned independently of the slide catch when locked back. Another issue is with the sounds that the slide and the hammer make when independently manipulated by the user. The springs sound scrunchy and do not give a smooth and pleasurable feeling (make a sex joke all you like).

The last issue with the replica’s performance is the trigger. For an MEU, the trigger should be highly responsive and should have a very noticeable pressure point before the hammer can be released. This replica unfortunately does not contain those characteristics of the trigger mentioned. The Covert Ops trigger is heavy and at times, feels mushy. A good thing is that the trigger doesn’t need much travel before the hammer is released, the bad news is, now that I’ve told you, you’ll notice it when you try it.

The Covert Ops 1911 is a nice pistol for skirmishing and feeling like a covert agent. The replica performs very well for an airsoft pistol and can hold its own as long as you aren’t a trigger happy shooter since each magazine can only hold 14 bbs. They are advertised to hold 17 bbs however due to the retention of the spring on the follower, it is not recommended to fill the magazine that much.

Other than the realism being lost every time you look at the magazine holding a C02 bulb and the sound of the springs from the slide action and hammer, the Nighthawk licensed Covert Ops is a very nice airsoft replica to own. This pistol, unlike the GRP Recon and other more expensive variants, is designed to be a cheap alternative with all the performance and only a few cutbacks to the quality of the replica itself. This is definitely an economical replacement to going full Inokatsu on a more expensive version.